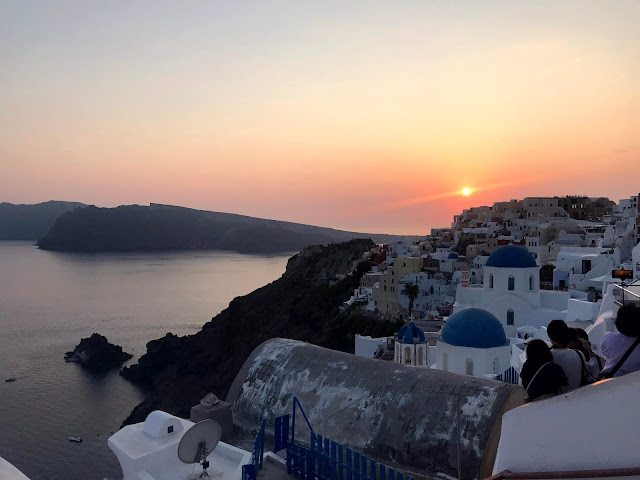 I’ve wanted to visit Greece since I was 16 years old, when I saw it on the Travel Channel and became obsessed with visiting the ancient ruins, the white and blue aesthetic and chasing sunsets on the Aegean Sea. I would pour through Greek Mythology books and took special interest in Humanities studies in College. Greece was at the top of my travel list, and convinced my husband that we absolutely HAD to make it part of our Anniversary trip this year. For some reason, I was fixated on Santorini, but started having some doubts when a friend visited earlier this year and came back to say that it was highly overrated, but something inside me was determined to prove them wrong.

The biggest thing I did differently was some research. I searched for the best place to stay while staying within our budget. My friends visited the Greek Isles by cruise, so I knew that staying on the islands I wanted to see would make a bigger difference since we would be on our own schedule, stay in the most accessible spots, and eat locally to have the most authentic experience as possible. I avoided the super touristy areas, which I found on AirBNB. One thing we didn’t “do right” was transportation, so that was a definite learning experience. So, we stayed in Santorini on two separate occasions. It was our first stop as we flew in directly from Milan, which by the way, was extremely cheap. We stayed 2 nights, for that first leg, on the very peaceful and quiet southern town of Perissa, home of the famous Black Sand Beach (pictured in the photo above). We stayed in a lovely Bed & Breakfast called the Aegean, nestled in the valley just a 15 minute walk to the beach, designed in the typical Cycladic style with white smooth walls and blue doors, windows and trimmings. It was so dreamy, but I must admit, I wish it were ocean front because that’s my thing. Good thing the place had a beautiful pool to take a dip or just relax with my hubby with a glass of local white wine. 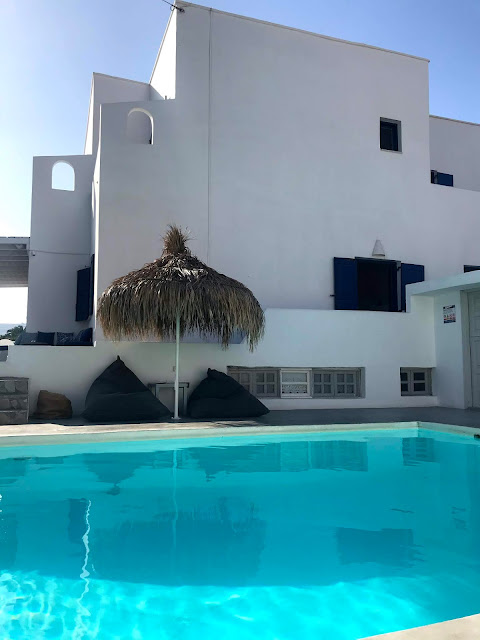 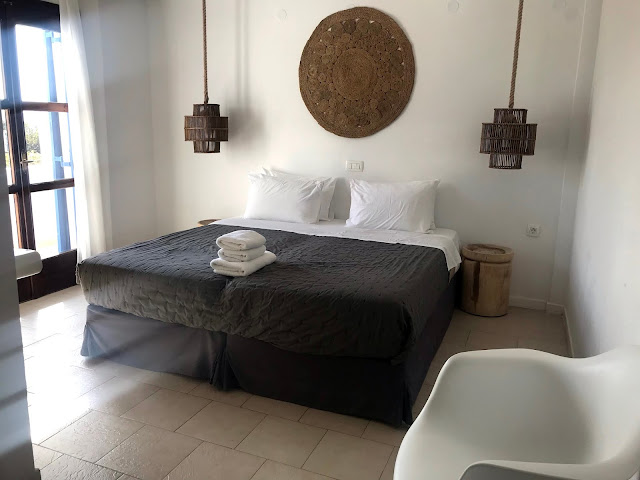 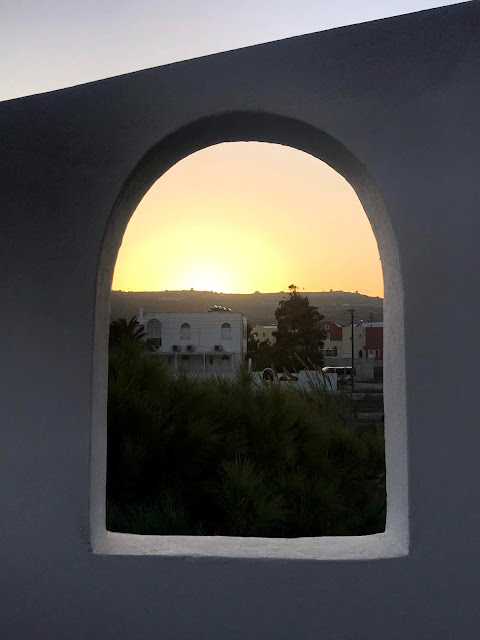 Our B&B hosts were extremely helpful! They scheduled the biggest adventure we would have on this entire trip, a day tour that would take us to a volcano, the caldera, an island and ending with a sunset in the most popular spot on the island Oia (pronounced ee-ah), for 45 euros each. Perfection! Or so we thought…

So, we were picked up in front of our B&B by a big, beautiful, comfortable bus that would take us to the port for the boat to reach all of these amazing destinations. The boat ride was lovely, just feeling the cool breeze as we navigated through the Caldera was amazing. First stop was the Nea Kameni Volcano, and we were given about 2 hours to explore, climb to the top and take super cool photos. It was quite the hike, but very doable. The views were insane, and the active, but somehow dormant, volcano was both awe-inspiring and terrifying at the same time.

Next stop was the Hot Springs, a product of the volcanoes sulfur, the warm water is said to be therapeutic, so we did what any explorer would do, we jump from the boat and swam in it. Little did we know that we would only have 30 minutes to swim from and back to the boat, making it a very athletic trek. One thing to point out, the high levels of sulfur make the water a deep yellow, and if your swimwear is white, it will permanently stain. After the springs, we were taken to the island of Thirassia, also inside the volcanic caldera, and we were able to enjoy local lunch, you can’t beat $2 gyros, you just can’t. We hiked all the way to the top of the town. Quite possibly the most tired I’d ever been in this part of the trip since the path was steep and the steps were far apart, but it was so beautiful once we reached the top, it was worth the hike. By the end our legs were linguini, but what came next would shake me to my core.

For the final part of the tour, we took the boat back to the docks where we began and were to be taken via bus to the northern part of the island to enjoy the sunset in the idyllic town of Oia, where all the most famous photos of Santorini, showing the blue tops of chapels while the sun would set magically into the sea. We were instructed to confirm our final destination in order to get on the right bus that would take us to Sunset heaven and then back to our hotels. I asked about 3 times, which was our bus, and in all the mess of people asking the same questions, we were directed to a bus and got situated. As soon as we reached the point where all the buses turned to go north, towards the sunset, our bus took a sharp left, away from the directions we were supposed to go. I immediately started to freak out and gave my husband a terrified look and he just gave me the good old “I don’t know” gesture. I waited about 5 more minutes to see if we would change routes, but we kept going in the “wrong” direction. When we turned at the sign to our beach town of Perissa, I knew we were in trouble. So, I bothered the nice couple sitting in front of us and as calmly as I could asked them if knew if we were going to see the sunset. They looked at me as if I were crazy, and said, “No, we’re going back to our hotels”. I busted out a “WHAT?!” and they confirmed it. I was livid! Mind you I was really looking forward to that moment, but at the same time, extremely tired. My bratty side really wanted to come out, but I had to take a breath, appreciate the amazing day we’ve had and not think about how we kinda got screwed out of what we paid for. Then I remembered that we were set to return at the tail end of the Greek island hop and just made it a point that the purpose of that second stay would be to catch that damn sunset. 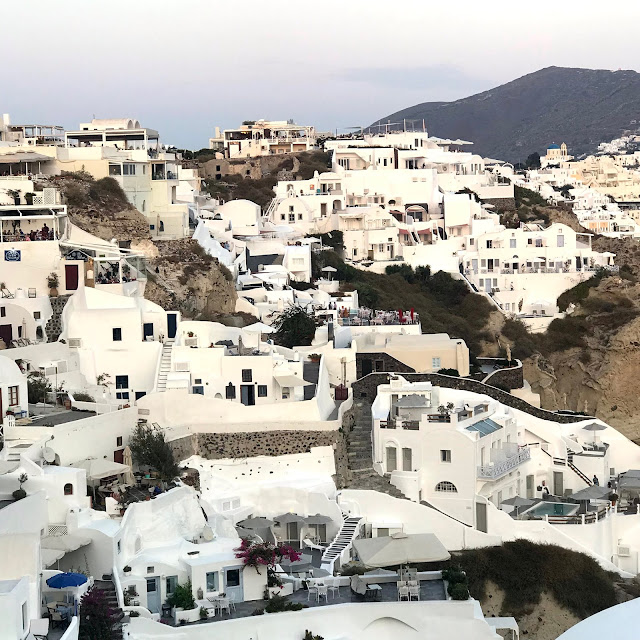 After, visiting 2 more Greek Islands (I’ll save that for a later post), we returned to Santorini. This time around we were able to stay in Oia, just outside the city center in the cutest beachside villas we’ve ever seen. 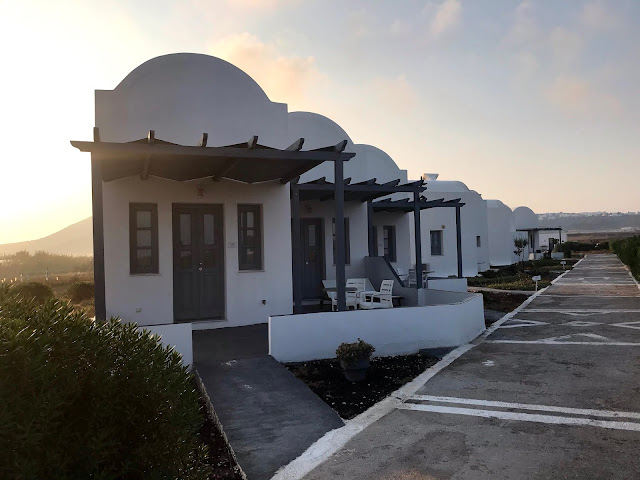 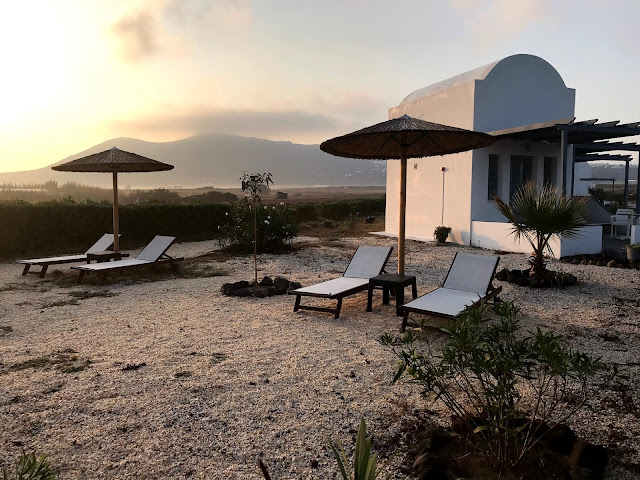 Our hostess helped us set up transportation to the city center to catch our elusive sunset, and though we were warned, I was not expecting the insane amount of tourists cramming themselves in the the one spot to get the coveted shot of the beautiful cliffside showing those gorgeous blue topped cupolas. We spent all of 10 minutes to see what the fuss was about, and though I hate being caught in a tourist trap, we got the shot and it was well worth it. Somehow, we found some lovely spots to take pictures and enjoy a delicious dinner as the sun hid behind the cliffs into the sea.

So, is Santorini overrated? If you only take a half day tour and get caught up in the one tourist trap, maybe. If you have some time to explore, check out the southern towns as well as the north, do some trekking off the beaten path, you can truly enjoy the beauty of this idyllic island.

2 thoughts on “Santorini: Was it everything I dreamed of or Overrated?”